September 14, 2020
News Release Date: September 9, 2020 THOUSAND OAKS, Calif.— A young male mountain lion with physical abnormalities – a kinked tail where the end is shaped like the letter “L” and only one descended testicle -- has been discovered in the Santa Monica Mountains, biologists with the National Park Service say.  This critical discovery represents the [...]

Mountain Lion Suffering From Skin Disease, May Be Linked to Poisons

National Park Service researchers recently re-captured the female mountain lion known as P-53 and treated her for mange, a parasitic disease of the hair and skin. Mange is generally rare in wild cats, however, it has been widespread in bobcats in the Santa Monica Mountains area since an epizootic started in 2002 caused extensive mortality […]

The Santa Monica Mountains Trails Council helped repair the Backbone Trail section along Kanan in Zuma Canyon. The many fire/post-fire rain damage related tasks included clearing the trail of any hazardous rocks or branches, reestablishing the trail pad by spreading any slough that fell from the hillside onto the trail, and finding large rocks/dirt to fill a very deep rut that was cutting directly across the trail.

The Complete Hiker's Guide To The Backbone Trail 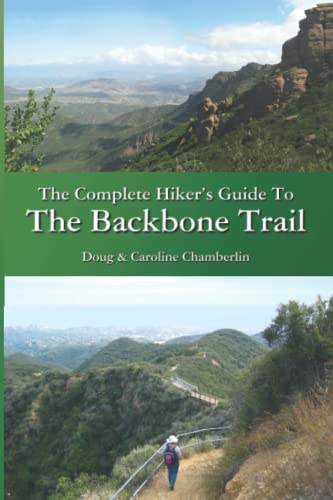 (As of: 2022/08/18 12:00 am - Details
×
Product prices and availability are accurate as of the date/time indicated and are subject to change. Any price and availability information displayed on https://www.amazon.com/ at the time of purchase will apply to the purchase of this product.
)
View on Amazon